Repairing a Schecter guitar, and finding a nice surprise

So I was practicing on one of my guitars (a Schecter C-1), and all the sudden the amp started buzzing like crazy, and I couldn’t hear any output from the pickups. I realized that I had just shifted, and that the cable had shifted on the guitar’s jack.. so I unplugged it, and saw that the jack was loose. Being the geek that I am, I figured I’d set the guitar on my desk, grab the soldering iron (which was about a foot away), and figure out what was going on.

I pulled the backplate over the electronics off, and didn’t see anything obviously wrong under there, but did note a few wires that were interesting.. hmm, we’ll get back to that. I then disconnected the output jack, and saw that the ground had come loose from the output jack – it was probably wired in a way that would cause any twisting of the jack to pull directly on the ground – bah. Here’s what it looked like after I had stripped back an extra 1/4″ or so of the outer plastic shield back, and twisted the ground wire back up to solder it:

Apologies for the picture quality – this was in my basement with my flash-less camera phone.. 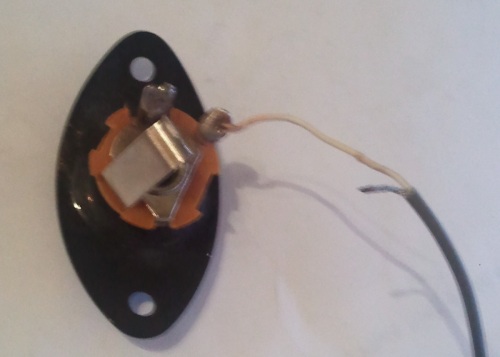 It was a pretty easy job to remove the old wire, and get the ground soldered back in properly. I am a bit out of practice, so it’s not pretty, but it is functional: 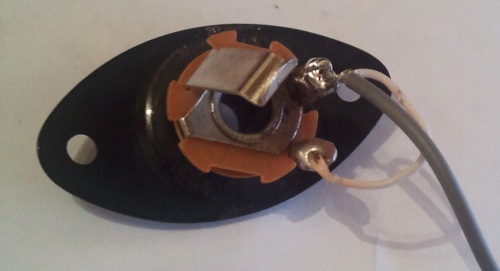 I tried to solder it at an angle that would make sure that the guitar cable couldn’t snag it when it was plugged in. It seems to be pretty good: 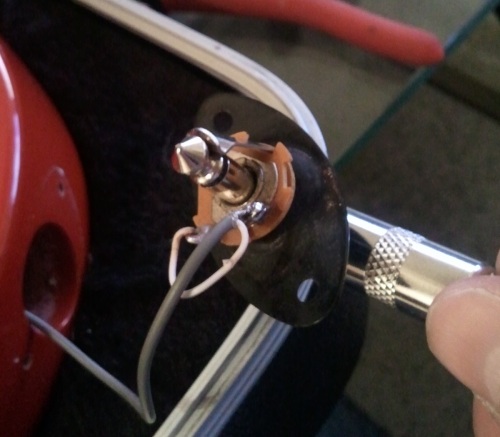 I then made sure that there wasn’t any extraneous noise, and that the guitar worked — as expected, this fixed it – yay! Now, back to the fun part.. as I was reassembling the guitar, I took a closer look under the back coverplate: 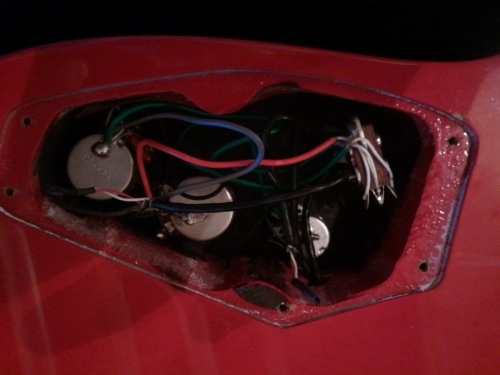 After some cable tracing, I found out that the stray wires were what I was hoping for.. take a look at the red and white wires in this picture: 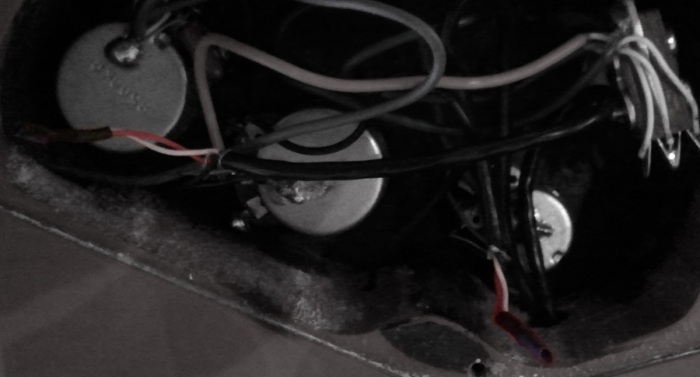 The humbuckers installed on this guitar (a Seymour Duncan SH-6b Distortion on the bridge, and a Seymour Duncan SH-2n Jazz on the neck) can be set up to allow them to split into single-coil pickups, and to run in parallel — *nice*! However, on my guitar, they are just hardwired for humbucking mode.

This means, of course, that by repairing the guitar, I “inherited” (aka gave myself) a new project — to set up the guitar for push/pull operation to split the pickups. ;) It’s a relatively cheap job, and fairly easy to do.. sounds like fun! This particular model has two volume knobs (one per pickup), and a shared tone knob.. so I need to decide if I want to replace both volume knobs (to allow me to split the pickups individually), or just replace the tone knob and split both pickups together.

If you’ve done this type of project before, I’d appreciate any advice!

Previous post: What not to do when having a baby…