What not to do when having a baby…

(Note: Not geek-related in any way, shape, or form. Enjoy! Alternate title — “How chicken became my mortal enemy”)

On Sunday, March 6, our second boy was born! His name is Joshua Xavier Carlson, and I may be a bit biased, but I think he’s a cutie. ;) 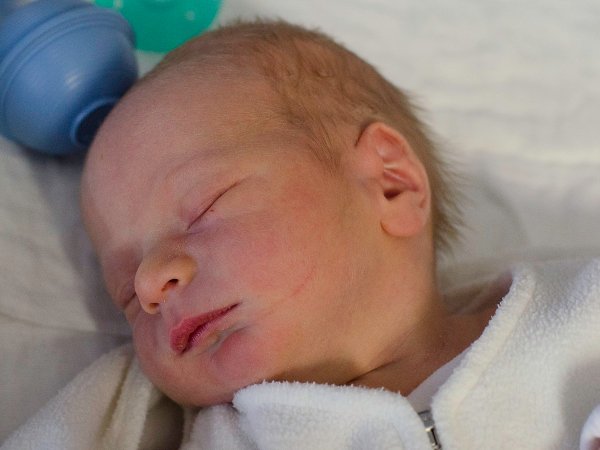 We’re all doing great.. but that’s not really what this post is about. Instead, it’s about how Daddy was stupid and did something that you should never do if you’re helping take care of a momma and baby! Let me tell ya, I really earned my self-given moniker of ‘village idiot’…

So it was Sunday night, about 16 hours after Joshua was born.. I was absolutely exhausted; I’d been up since about 6am Saturday morning, with a grand total of somewhere around an hours worth of sleep.

We were putting in our dinner orders, and I made my first major mistake — I ordered the chicken alfredo. *Insert some ominous sounding sound from the movie when an idiot makes a huge mistake*.

Our food arrived, and I realized I was absolutely famished. Sat down at the table, and started chowing like crazy. Next thing I knew, I felt some food stuck in my throat. Sigh. That’s happened a few times before, and I’ve always been able to cough it up.. so, of course, I assumed that this time would be no exception. I then spent the next two hours or so trying everything I could think of to hack up the food.. alas, it was not meant to be. Eating more food didn’t work. Chugging water didn’t work (wouldn’t get past the food at all either.) Internet-provided suggestions of slamming diet coke, eating pudding, trying to hock a lugie, and various other methods didn’t work. Crud.

This wouldn’t be a big deal.. except that I couldn’t eat anything, drink anything, and figured that at the rate I was spitting up saliva, this couldn’t be good. I finally took a walk of shame down to the emergency room, and sheepishly admitted what happened to the triage nurse. She laughed with me, and said I was the first time she’d ever had a daddy come down from family birth with stuck chicken.. although if I’d passed out and slammed my head on something I’d be in great company!

The ER docs decided to try a few minimally-invasive methods to try to get the chicken to come loose. The first was some sort of medicinal pop rocks.. he had about an inch of them in a styrofoam cup, and another cup with a tiny bit of water. My instructions were to immediately slam as many of the pop rocks down my throat as hard as I could right after he added the water, and try to hold it in.. the hope is that it would jar the obstruction loose. This actually sounded kind of fun to me.. with the puke bag at the ready, I slammed the cup of watered rocks, and did my very best to not let them go back out. I think I probably lasted about half a second.. and let me tell ya, the result redefined the phrase ‘projectile vomit’ — it was quite an amusing mess! After laughing a bit about it with me, the nurse asked it it had done anything.. alas, my new foe was still firmly lodged in place.

Next line of attack — some sort of medication that is supposed to relax the esophagus and hopefully let things slide down. And.. no dice. (I guess this rarely works, but when it does, well, it saves time.)

So what do you know.. it was time for an emergency egd! My ER doc paged the GI on-call, and the staff moved me into an emergency room ‘deluxe suite’ with enough room for all the equipment. Hurrah!

About an hour later, after an IV, some drugs, and a garden snake down my throat, my nemesis was dislodged – hurrah! After making sure I didn’t crash from the drugs, they sent me back up to the birthing center to hang out with my wife and son.

In any case, thanks to the staff at Saint Francis for taking care of my stupid idiotic mistake, and more importantly, for laughing hard about it with me! They got me out of the ER and back to my family in record time (just over two hours start to finish!), and then the birthing center nurses made sure that I had plenty of Popsicles to keep the throat semi-usable. ;) Biggest downside – I couldn’t sing with Joshua any more!

Oh, and if you’re a dad who is trying to take care of your tired wife and son, and have had almost no sleep.. take advice from someone who’s made the mistake… and please, *order the soup*.

Next post: Repairing a Schecter guitar, and finding a nice surprise