Lots of rain in a short period of time != good roads

A friend of ours was having a engagement party up in New Hope, MN tonight (June 25 2010).. we knew the weather was going to be kind of nasty, but we figured that Tiff’s parents live about four miles from our friend’s house, so Kai could be with a babysitter nearby, and decided that we’d go ahead and partay. ;) However, between the time that we dropped Kai off at Tiff’s parents and left for our friend’s house, the rain had picked way up and made roads that we had been on 15 minutes before impassable. I (as usual) had my camera along, and snapped some photos while we tried to find a route to our friends house that wasn’t covered in a few feet of water.. it took us about 30 minutes to travel those few miles. In any case, the good news is there didn’t seem to be anyone hurt! 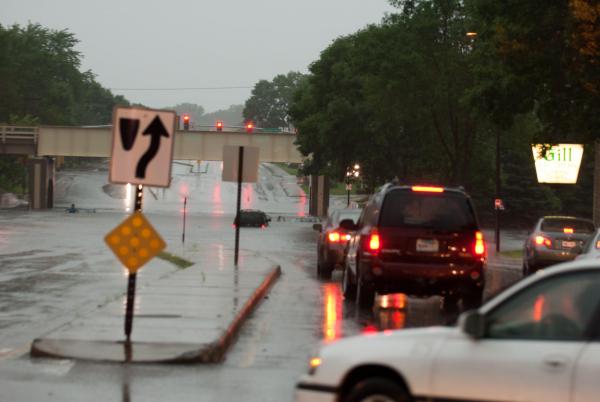 Flooding under the railway overpass on 42nd Avenue/County Road 9 between Quebec Ave and Oregon Ave in New Hope, MN. 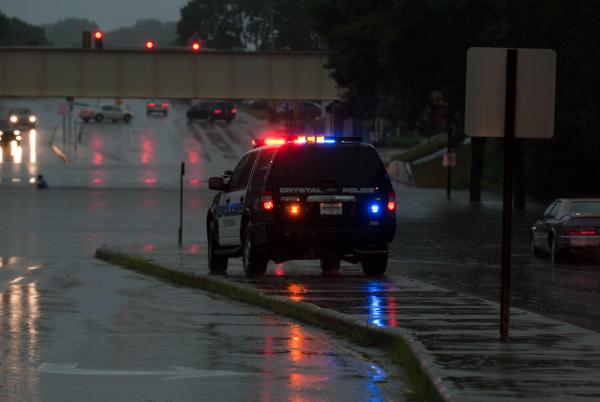 Crystal police officers have arrived to help make sure that nobody is in the flooded cars and keep everyone safe.

There are five vehicles in the water that I counted; three of the cars are almost entirely submerged. A witness mentioned that there was a baby in one of those cars, and that the man driving had carried/swam the baby out a few moments before we arrived.. yikes!! 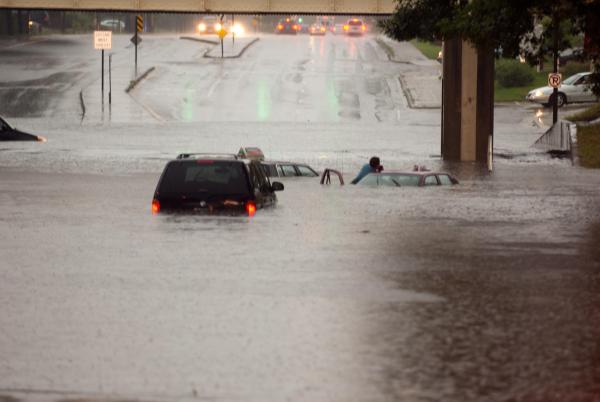 If you look on the right hand side of this photo, you can see some water movement – almost seems like water was channeled into this area. 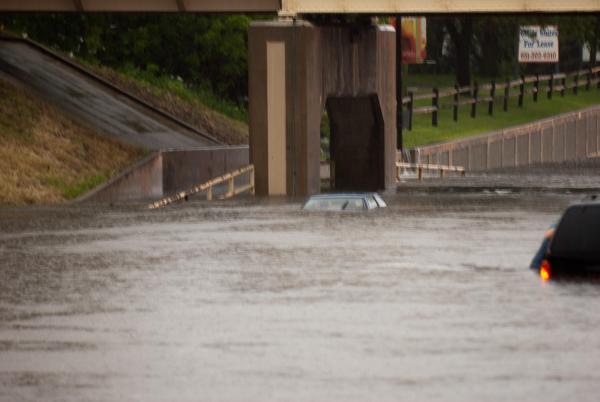 Sorry for the poor quality photo. ;( One of the three almost-entirely-submerged vehicles.. there is also water pouring down from the apartment complex which has suites for lease! 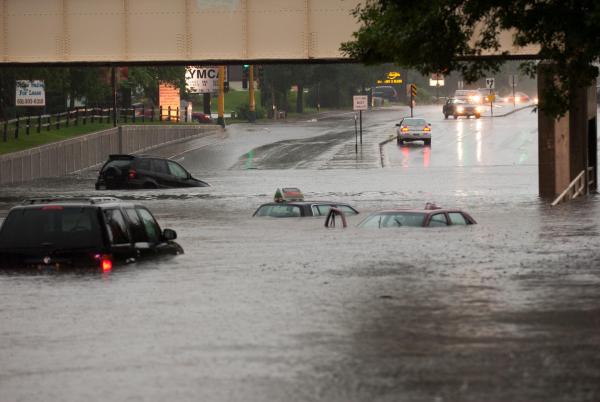 I believed the SUV in the upper left of the photo actually tried to make it through the water after I started taking shots – not positive though. I was amazed at the number of cars we saw going through water that was far too deep for them to handle as we found a route to our friend’s house. 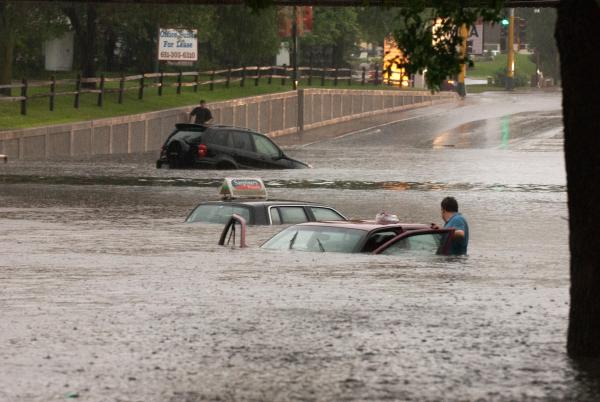 I was curious what the guy in the blue shirt was looking for in the car.. maybe he was the owner trying to get his belongings? Who knows.. 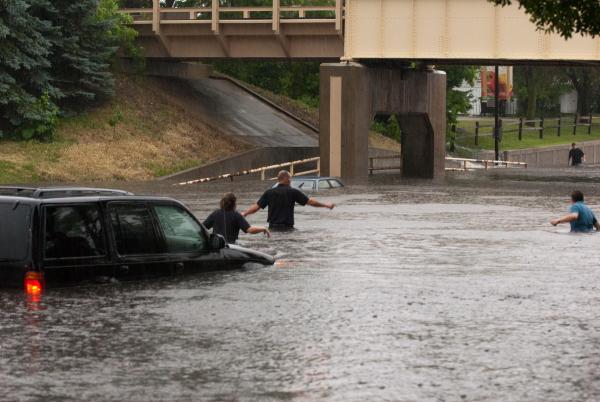 Crystal police officers wading into the water.. about this time a fireman standing near me turned to another officer on the scene and asked if the PD needed the fire department’s boat. That would have been interesting! You can also clearly see the flow of water from the apartment complex above in this picture; look behind the railing in the upper-right third of the picture. 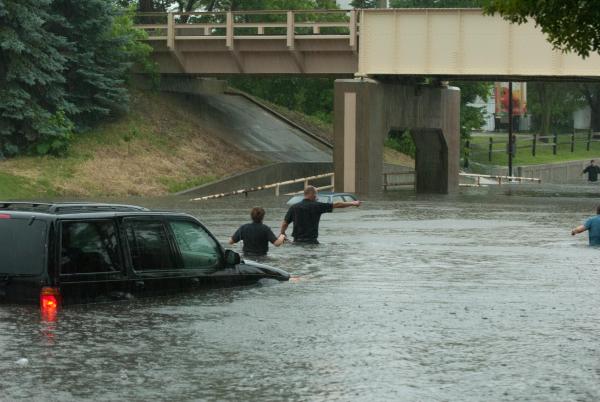 Officers taking charge to make sure that everyone is accounted for. From the moment they arrived (which was about a minute or so previous to this shot), they were putting together who owned each car, making sure that nobody was missing. 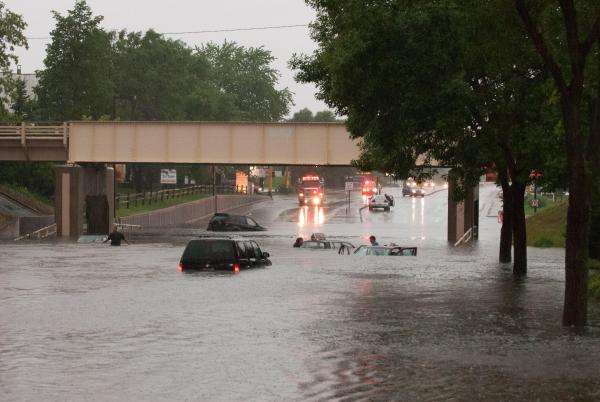 Fire department and police officers arriving on the west side of the flooded area. 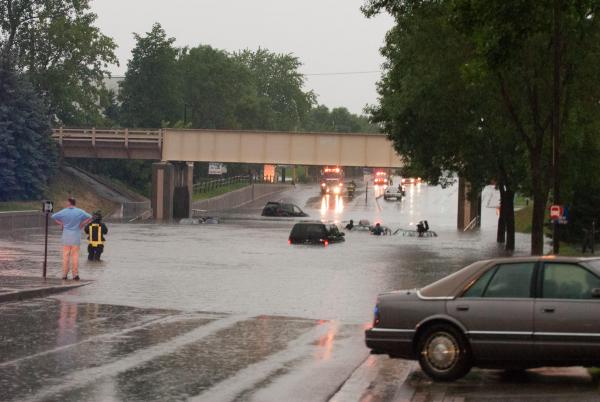 At this point I think most of the onlookers realized everything was OK, and the cars that were not in the water started trying to get out of there. 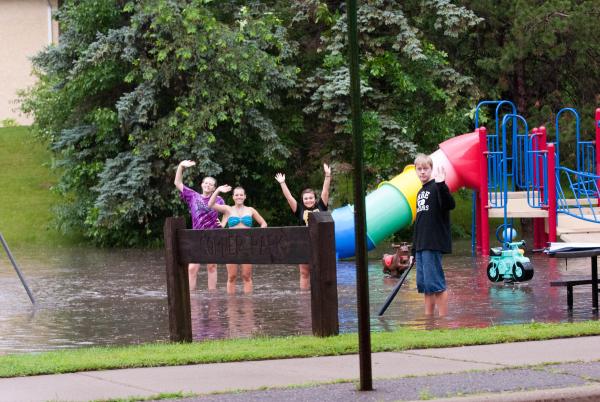 About 10 minutes later, as we’re back on the road trying to find a non-flooded route, we came across some kids who were quite enjoying the turn of events. 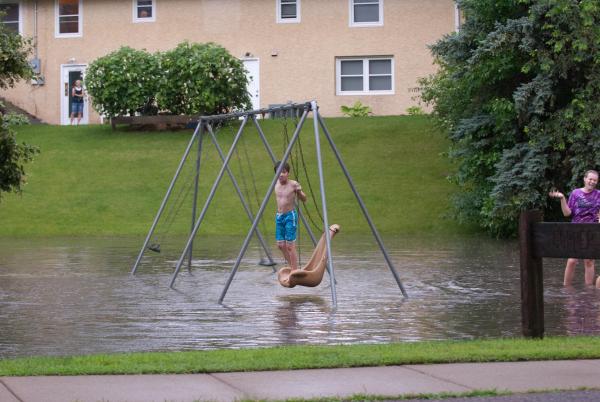 Swinging above a nice pool of cool water.. life is grand! 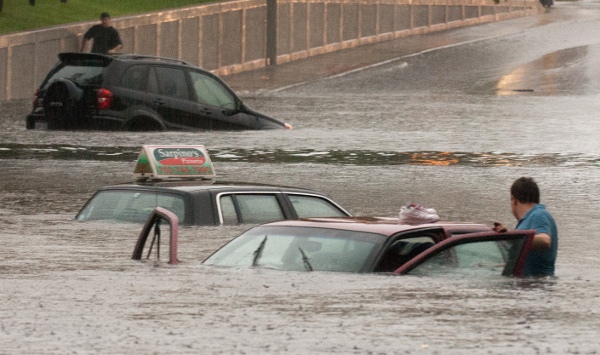 Oh, and in case you missed it in the teaser image.. if you ordered a pizza from Sarpino’s Pizzaria (763-746-7990 I guess!), and it failed to arrive on time, and they gave you a long story about the delivery guy getting caught in a flood, they were not lying. You wouldn’t want the soggy pizza anyways, would you?

By the time we were headed back to Tiff’s parents to pick up our son and head home (around 11:15pm?), the roads were totally clear again, and there was no real sign of flooding – crazy! We drove under the same underpass that hours before had at least 3-4 feet of water under it.

For anyone involved in this – hope that you get things straightened out with your insurance companies ASAP, and if anyone was injured in the storms, to a quick recovery! Also, a sincere thank you to the police officers, fire fighters, and other emergency response personnel who respond so quickly to these type of events — your work is appreciated!

Oh, and if anyone wants tips on how to get the stench out of a car that has been flooded.. well, my advice is probably not to, but this stuff might work…. ;)

Next post: One of the best company slogans I have ever seen