Our beloved 2007 Passat just came up on lease end, which means that it was time to decide if we wanted to keep it, or if it was time to go car shopping.

We loved the car, but our old Passat (which we traded in for this leased ’07 Passat) ended up costing us a ton of money just for routine maintenance as it got over the 60,000 mile mark. Note that we didn’t have any real problems with it; all the maintenance was either routine (oil/lube/filter, other fluids, belts, etc) or replacement of wear components (brakes, boot on the front suspension, etc.) We hadn’t had to do any of the expensive work on our ’07 Passat – we basically just had to do 4 oil changes in the time we owned it.

Here’s some of the expensive / annoying repair notes from our previous Passat:

..and the one thing that did apply to both the old Passat and our ’07 Passat — expensive gas (they require premium – although I have heard that you can do ok with regular gas, didn’t want to risk it.)

However, I really did love our Passat, and we had driven way less than the contracted miles on our lease.. which meant that the residual amount on the lease (the price we’d have to pay to purchase it, plus taxes of course) was slightly under the wholesale value of the vehicle, and therefore a reasonable deal. I tried to get some independent confirmation of what my gut was telling me about maintenance cost, and after some searching, I found Edmund’s True Cost to Own tool. Punching in both the 2007 Passat and a 2007 Impala (domestic car kinda/sorta similar to the Passat?), I found what I was hoping not to find – that the Passat was more expensive to maintain.

So, we decided to go ahead and find another car.. we came up with a list of requirements:

After many gruelling nights spent on Edmunds, Craigslist and Carsoup, I ran across Alliance Car Sales. Their offerings intrigued me, as it seemed that they sold primarily low-mile late-model vehicles, and for prices that were quite good. I shot them a (very, very, very, very long) email with what I was looking for, and got a reply back from Dave in short order with a few suggestions, and asking when Tiff and I could come out to check out some cars. (They buy cars off auction, then use them as a rental fleet until a customer is interested in buying one of the.) We were able to meet Dave a few days later, and tried out a few cars. When we went in, we were considering the following, in no particular order:

Note – the 2008+ Taurus/Sable are actually the Five Hundred/Montego with an upgraded engine.. very different from the Taurus of old. They are larger, get better mileage, have a much more modern design – in fact, they share their platform with the Volvo S60. I personally wouldn’t really consider a previous-generation Taurus or Sable.. heard way too many horror stories.

We were able to knock off the Sonata, Accord, and Camry just due to size.. the Altima would probably work, but they were quite expensive, so we dropped that too. The Grand Prix and Impala (I guess they are essentially the same car, like a Taurus vs. Sable, just different body and trim) worked, but they were hard to find (and expensive) in leather. All of the Milans and the Taurus that Alliance had in stock were out for rental, so we met on meeting Dave later on in the week when he’d have them back on the lot. (Side note – if you are in the metro area and interested in a newer used car, I highly recommend Alliance – it was really great to work with a person who was only interested in getting us the right car, and didn’t give us any pressure at all. Dave was even willing to offer me advice after I told him we were purchasing a car elsewhere – who else will do that?)

..and then one of my Craigslist RSS feeds turned up something interesting – a loaded ’09 Sable Premier at a Mercedes dealership for a very reasonable price. The car is newer than we were really looking for, and also more expensive ($16,500.) However, it had everything we wanted (plus more), and would more than meet our goal of lasting at least five years – it’d even have a warranty included for the first couple years. I stopped out at the dealership for a test drive, and only found one issue with the vehicle.. it had been smoked in by the previous owner (who only owned it for a few months.) The smoke wasn’t super-heavy, but both Tiff and I are sensitive to cigarette smoke, so this could be a problem for us. The dealer assured me that they had a solution to fix that, so I went ahead and took the car to my mechanic for a mechanical inspection, which it passed with flying colors. I also got his impressions on how the cars were to work on in general (going back to the Ford Five Hundred / Mercury Montego days, since they are essentially the same car, just with a smaller engine), and he said they were generally quite reliable, and were one of the better cars out there for repair costs, etc. An Edmunds TCO backed this up: 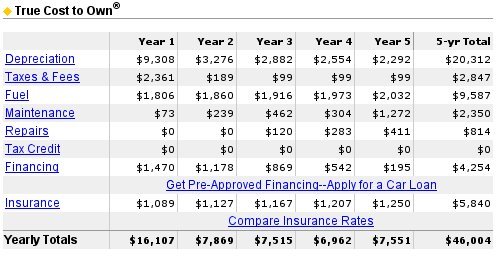 Granted, this is for a new Sable (they don’t have 2009 available for ‘Used TCO’ yet), but the 2008 was there for used, and came out at $4746 for maintenance and repairs – still quite good. Short version – we signed a purchase contract on the vehicle, with a stipulation that we had to be satisfied with the smoke scent after their treatment, and then agreed to purchase it the next day (they used the Auto Vaccine

treatment, which worked fairly well – however, it did leave a hint of smoke behind after the scent of Auto Vaccine faded away, especially when the AC was on.. the dealership promised to do the Auto Vaccine again whenever we desire, but I decided to do some cleanup myself in advance of that – will detail what I was able to do in a future post.

We’ve liked the new car quite well so far; it’s big, comfortable, has tons of features, and gets good mileage.. but it’s a sedan, not a sports sedan. Ah, Passat, how I will miss you! Especially the tiptronic transmission.. 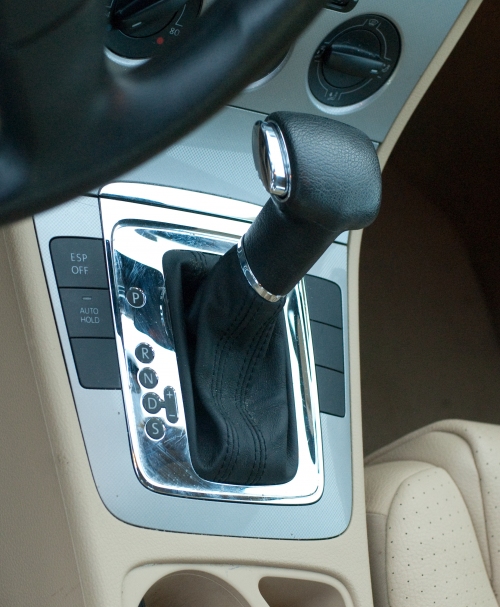 I hope the next owner of our goold ‘ol Passat will love it as much as we did! :)

Next post: How I got rid of the smoke smell in my new (to me) car