The first treatment was performed by the dealership. They use the Auto Vaccine

product by Biocide Systems. While I was sitting in the dealership waiting for the salesman to get some paperwork done, I had done some quick research on my phone, and this is the solution that I found that most people recommended – so I was glad to hear that they use it. From the reviews I found, here is the recommended procedure:

When we picked up the car from the dealership after the treatment, there wasn’t a smoke smell in the interior anymore; it just had a slight chemical smell. However, when we fired up the air conditioning, there was a definitive smoke odor again (which faded to near-nil after shutting the AC off) — I have a hunch they didn’t let the product circulate through all the vents. The dealer included a second treatment in their deal, but we don’t have time to let the car sit for 24 hours at the moment, and I decided to try a few treatments myself.

. It is basically a can of foam with a tube about two feet long that you feed into your center air conditioning vent and spray the foam until the can is empty (it took ~4 minutes for me – felt like forever!), which will cover the surface of the evaporator core with their foam. Then you let it sit for 30 minutes, and then start the car and run the AC full blast for a few minutes. This worked magic on the smoke smell from the AC – it was horrible before the treatment, and I couldn’t smell it at all in the air coming from the vents after the treatment was finished. I did read a review on the ‘net where the poster mentioned the foam sprayed all over the place; it turned out that he turned the can upside down while applying it, which apparently can cause the foam not to get all the way down to the core. So when you fire up the AC, whoosh, foam! If you try this, be careful and follow the directions on the can. They do warn on the can to follow the vehicle manufacturer’s cleaning instructions or to have a certified technician apply it – I’m imagining this is because of the possible damage that could be done if this product were to be applied incorrectly.

After that treatment, I could smell a slight smoke smell on the interior surfaces again (probably because it circulated out of the AC after the Auto Vaccine treatment.) When I purchased the 1Z cleaner, I also picked up a can of Dakota Odor Bomb

– neutral scent. I figured I would give this a shot, as the reviews I had read of it said a few hours was enough time. I did the same steps I had read about for Auto Vaccine (above), except I didn’t run the AC during the process (since I had just treated that.) I went ahead and unleashed the bomb. The next morning, I let the car air out for a bit, and found that there was a nasty film all over the entire interior – blah! I spent the next half hour or so wiping down the interior to get the film off, and then went to work. The smell was really strong for a few days; once it started to fade, it was actually much better – no hints of smoke left, so it seems it did some good. However, if I were to do this again, I would probably not use the Dakota product, but find a time to do a full Auto Vaccine treatment again – it costs a bit more, and takes more time, but we didn’t have any of the nastiness with it! 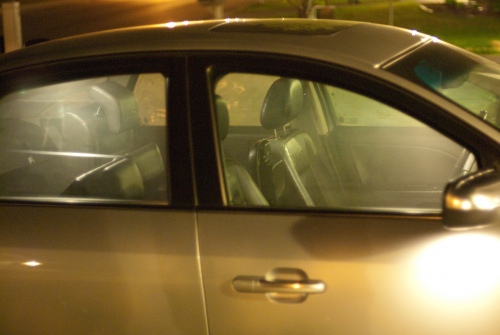 I also noticed that the leather on the car seemed a bit dry (not sure if it was because of the Auto Vaccine, Odor Bomb, or if it just hadn’t been treated before), so I picked up a container of Lexol 3-in-1 Leather Care Spray

. I applied it using a microfiber cloth, rubbed it in with a small brush, and let it sit for about 5 minutes before wiping it off and polishing with another microfiber cloth. I had great results with it; the leather feels much better than it did before – smoother and softer. I will probably reapply this a few times over the next few months to ensure the leather’s in good shape, and then keep it up on a semi-regular basis to keep the leather nice.

The steps above have much improved the smoke scent in my car – as of right now, I can’t even smell that it was ever smoked in. If you try any of these, or have other tips for getting rid of the smoke odor, I’d love to hear about it!