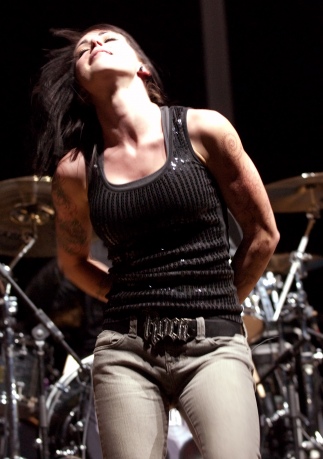 Sarah Anthony of the band The Letter Black; shot at the Minneapolis Convention Center on November 14, 2009 during Skillet’s ‘Awake and Alive’ concert tour.

This is Sarah Anthony of the band The Letter Black. I had never heard of this band before Skillet’s Awake and Alive tour, but they are awesome. Remind me a lot of Evanescence, but different. Highly recommend you pick up their album, Breaking the Silence

– it’s not expensive. I’m also looking forward to their next one, and seeing them live in concert again!

I should note that they were significantly easier to photograph than Skillet.. no pyro and no fog == happy photographer. ;)

Next post: Sarah Anthony of The Letter Black (aka Rock Photography is Fun Part 8)